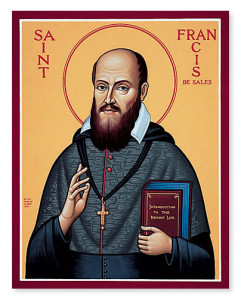 St. Francis de Sales was born of noble parents on August 21, 1567 at Thorens in Savoy, now part of France. After studying law in various universities of France and Italy, he decided to become a priest. On December 18, 1593 at the age of 26 he was ordained and eventually became Bishop of Geneva in 1602.

In addition to his role as priest and bishop, St. Francis was a spiritual director to many people and was the author of several books. Two of his books are considered masterpieces on the spiritual life and are entitled, The Introduction to the Devout Lifeand The Treatise on the Love of God. St. Francis was known for his gentleness and this is how he drew people to know God’s love.

In 1604, St. Francis met St. Jane Frances de Chantal, a widow with four children. He became her spiritual director and in 1610, they founded the Order of the Visitation—a convent whose nuns would practice the virtues of humility, piety and mutual charity.

On December 27, 1622 in Lyons, St. Francis suffered a cerebral hemorrhage and died the following day on December 28, 1622. He was beatified on January 8, 1662 and was canonized a saint on April 19, 1665. In 1923, Pope Pius XI named him the patron of Catholic writers and the Catholic press. He is also the patron of Adult Education. His feast day is celebrated on January 24.